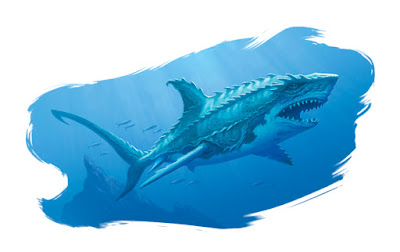 This is the last of the illustrations I did for Pathfinder Bestiary 5. It depicts a giant, primitive shark with a crab-like carapace and a hook-like tail. Even though this is a spot illustration, I really tried to convey an underwater atmosphere in this one.
Posted by Jim Nelson at 7:34 AM No comments: 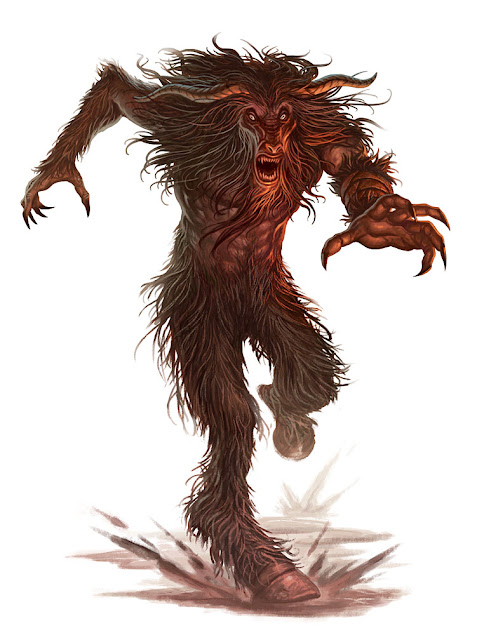 Here's another illustration from Pathfinder Bestiary 5. This one shows a "Capramace", described  to me as a "feral, goat-man monster" that's "wildly chasing a victim". My assignment was just to show the monster so there's no victim here... unless of course you feel victimized by the sight of a hideous goat man.

Unlike the last few illustrations I've posted from this project, this creature isn't my own design. I was provided with a reference created by another artist which showed the creature in a crouch. My job was to re-interpret him into a more dynamic running pose.
Posted by Jim Nelson at 2:44 PM No comments: 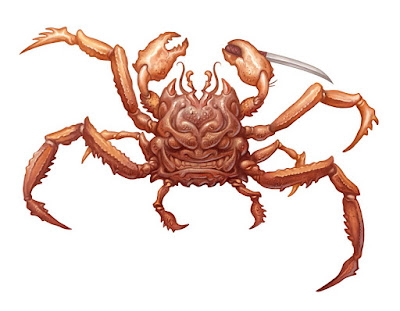 Here's a fantasy take on a real creature: the Heikegani crab, which is also referred to as the Japanese Ghost Crab. According to Japanese folklore, Heikegani crabs contain the souls of fallen samurai warriors. The version I painted isn't dramatically different from the real thing but the suggestion of a face on the back of the actual crab has been reinforced into a monstrous, distorted face. Plus, this crab wields a knife!

I'm not sure why a crab needs a knife but hey, knives are useful...

Painted for Pathfinder Bestiary 5.
Posted by Jim Nelson at 6:27 AM 3 comments: 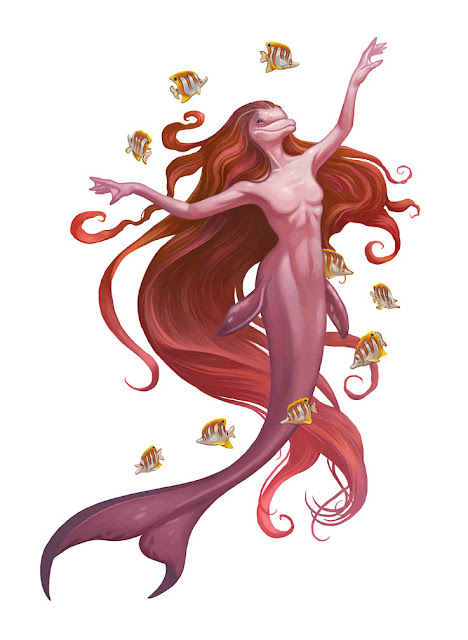 This mer-creature based on a pink dolphin (a real creature, by the way) was a huge challenge for me. I think it has a more feminine than most of my work. It obviously depicts a female creature but the pink color scheme and long red hair call to mind toys that are marketed to girls. There's nothing wrong with any of the above, this just isn't a place I typically go as an artist so it was fun and interesting to go there. It was something new for me and I wasn't sure if I'd be able to pull it off. Giving such a dolphin-like face to a relatively humanoid figure was especially difficult but in the end, I'm quite happy with the results.

Like the illustration I posted yesterday, this was painted for Paizo Publishing's Bestiary 5.
Posted by Jim Nelson at 8:25 AM No comments: 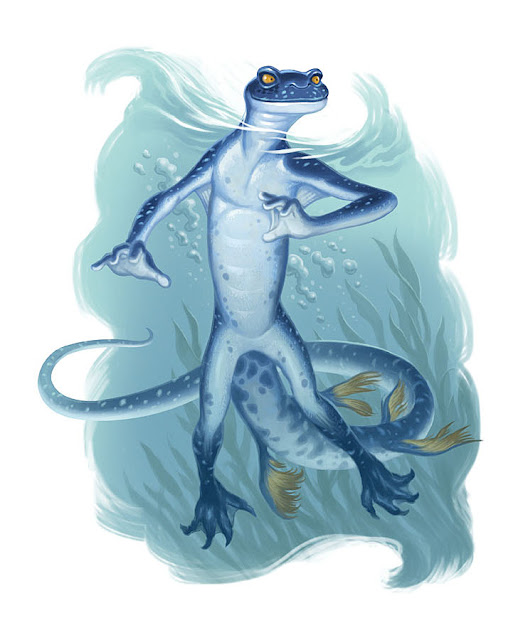 I painted this creature for the recently-released Bestiary 5 for Pathfinder, published by Paizo Publishing. It's a sort of humanoid salamander. I tried to give it a somewhat light touch since it's more of a whimsical creature than a "bad guy".

I love designing creatures like this.
Posted by Jim Nelson at 8:19 AM No comments: 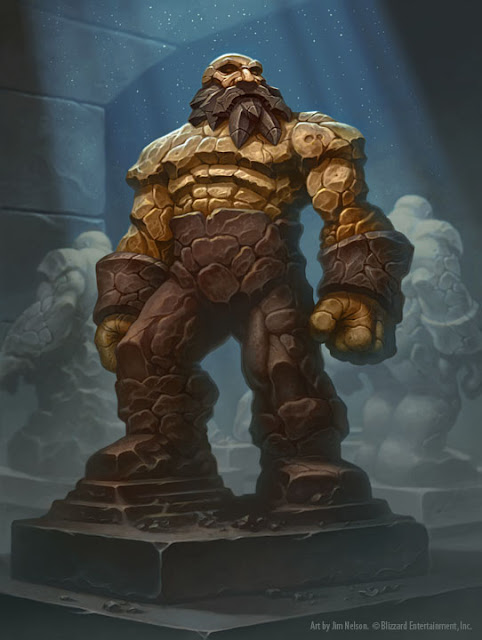 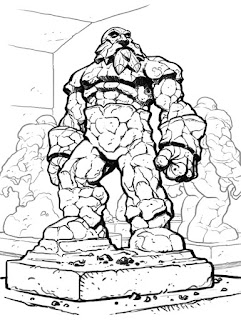 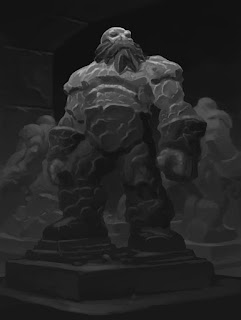 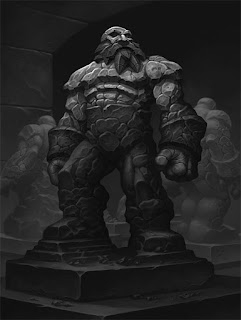 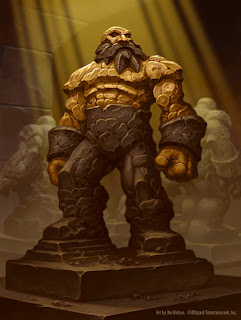 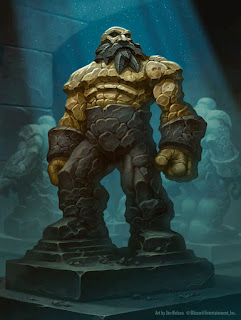 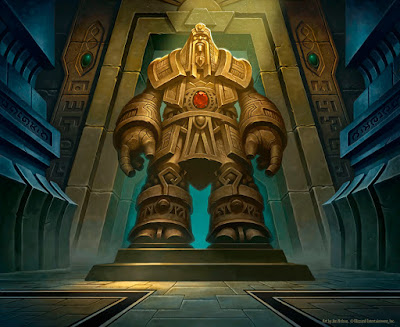 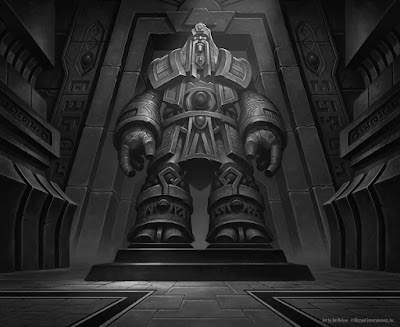 Here's another piece for Hearthstone: League of Explorers. The working title for this one was Giant Stone Statue. I think the final card is titled Investigate the Runes. Unlike the statue in the previous painting, this one's not moving but hopefully it's nice and imposing!

I've also included my value study in grays.
Posted by Jim Nelson at 6:21 AM No comments: Blizzard Entertainment is releasing Hearthstone: League of Explorers this week so I can show the artwork I did for the game. First up is Eerie Statue, a statue that has come to life and is stepping down from the wall in which it was ensconced.

I've included my preliminary drawing, a gray value study and the final art. 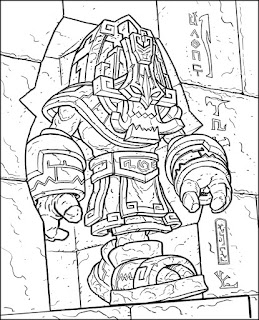 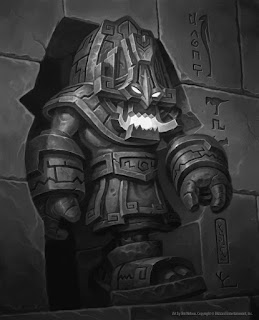 Posted by Jim Nelson at 7:35 AM No comments: