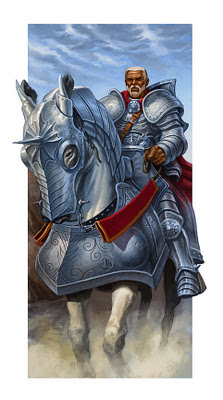 ... or as I like to think of him, Sir Rides-An-Armored-Horse.
This is another piece from Madness at Gardmore Abbey. The horse armor (also called barding) is based on a blurry photograph I took of some horse armor on display in the Tower of London. The art director was kind enough to allow me to break the picture border in a few places, one of those techniques that's easily abused but when used wisely (as I like to think I've done here) can add a bit of motion or energy to a piece. In this case, I think allowing the horse's head to break the left side of the picture box reinforced a sense of forward motion.
Posted by Jim Nelson at 8:30 AM