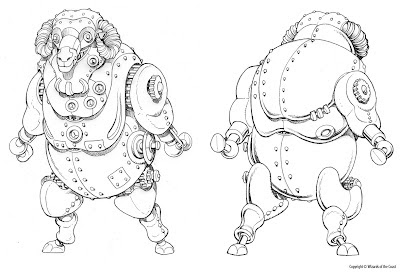 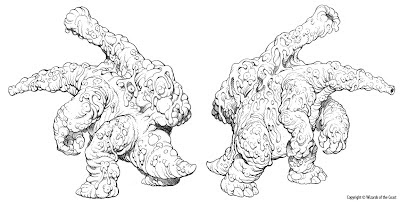 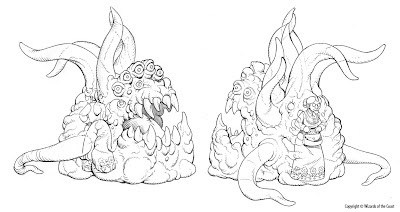 I did these miniature designs for Dreamblade years ago. If I remember correctly, at least two of them weren't produced, so this is the first time at least some of these drawings have seen the light of day. As always with miniature designs, I created a front and back view for the sculptors to work from.
The first image is an "electric sheep". He's actually more of a steampunk sheep because the idea was to create something with a clockwork or industrial revolution feel rather than a more contemporary robot sheep. I've always been very fond of this drawing.
The second entry is the truly disgusting Pus Cannon and this one may have been produced (I honestly can't recall). My assignment was to design a creature that literally had an organic cannon on it's back. It was to be covered in lumps and sores, some of them oozing. Yes, it's gross and yes, it was a blast to draw and yes, you're probably relieved that this piece isn't in color!
The third design was a great idea and I wish it had been produced. The concept was to have an invisible, gelatinous blob creature (not unlike the green, blobby aliens in some episodes of Futurama) that used a fake, friendly grandmother as a lure, like an anglerfish uses a dangling light to lure prey. If the miniature had been produced, the grandmother would have been made of opaque, painted plastic and encased in the blob, which would have been made of clear plastic. It would have been awesome! Ah, what could have been... unfortunately, they decided it was going to be too difficult to pull off.
Posted by Jim Nelson at 8:40 AM