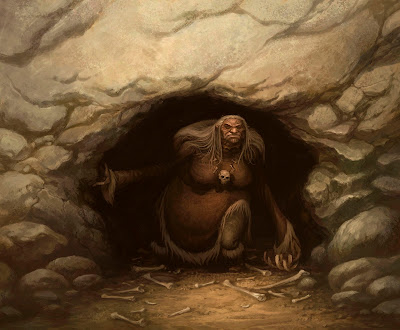 I've been waiting to show this for a while. It's the cover to a book I spent most of last year illustrating, titled Gnawer of Rocks. The book will be released in October and is published by Inhabit Media (you can pre-order it on Amazon now, just follow the link above). I see it as sort of a hybrid between a picture book and a graphic novel. The story is told sequentially, in panels and splash pages, but is painted and presented in a format similar to the picture book I illustrated for Inhabit Media a couple of years ago, On the Shoulder of a Giant. Like that book, this one is based on an Inuit myth, although this story is considerably darker. It concerns some children who wander into the lair of an ogress.

This was a challenging project for me but a rewarding experience and I'm hopeful that it will go over well. The story Louise Flaherty, who co-founded Inhabit Media, wrote the book. I found the story fascinating!

I'll be posting more from this project soon but for now, I hope you enjoy the cover art.
Posted by Jim Nelson at 8:33 AM