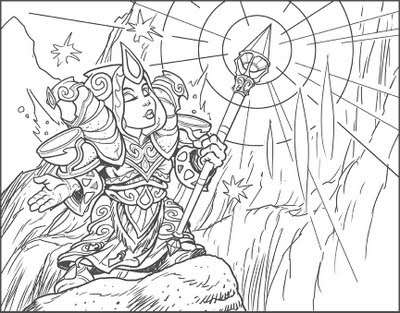 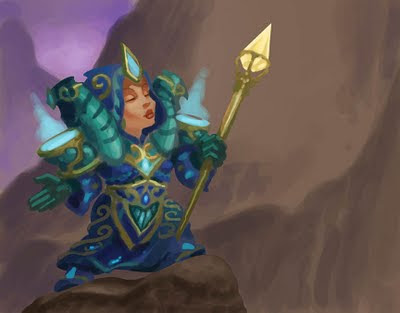 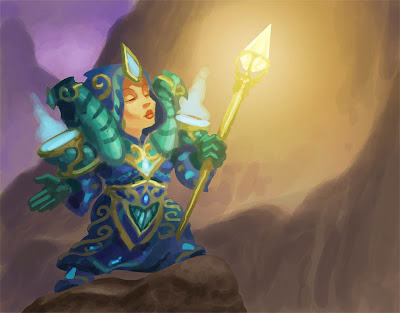 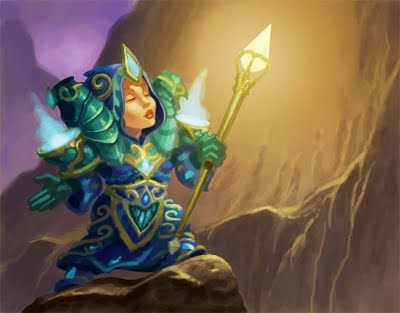 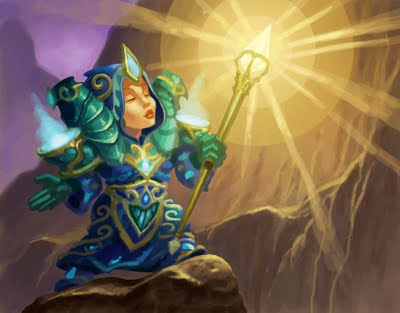 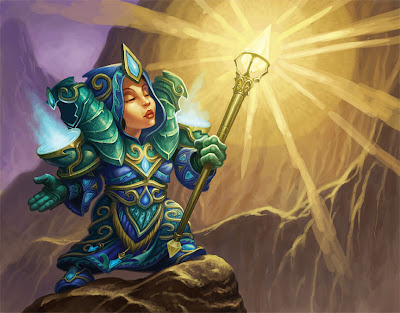 I've been a busy lad lately, thus the lag time between posts. However, I'll be posting quite a bit of art in the next few weeks so please "stay tuned". First up: a digital painting and some process images from a Warcraft card that appears in the recently released Twilight of the Dragons set. This piece depicts a gnome priest drawing upon holy magic. The entire picture was created in Photoshop and Painter, including the preliminary drawing, which I'll call Step 1. Due to the holy nature of the spell, I thought it would be appropriate to have the gnome's eyes closed, as if she's peacefully looking within to get in touch with the holy power she's summoning.

Step 2: I blocked in basic colors, using a hard round brush in Photoshop at varying opacities. At this stage, i wanted to establish the basic color scheme and values. I intentionally made the rocks very dull, muted colors to emphasize the colors in the gnome and to provide a semi-neutral backdrop for the radiant light that would emanate from the priest's staff.

Step 3: This is basically step 2 with a yellow glow added on a layer to further establish the light source. If I remember correctly, that layer was set to Linear Dodge mode.

Step 4: I begin pushing lights and darks in both the figure and the background, slowly adding detail, beginning to define the shapes of the rocks, etc. At this stage i want to get a firm handle on my value range for the picture. Again, I worked primarily with a hard round brush in Photoshop, set to various levels of opacity and flow.

Step 5: On two separate layers, I added concentric circles of varying golden yellow value and roughed in rays of lights.

Step 6: I worked up texture and detail throughout the piece, particularly in the gnome, refining her until she seemed complete. I added small strokes to the circles of light surrounding the staff. further defined the rocks and the background and even muted the color of the sky and the purple mountain in the distance a bit. Most of this was done in Photoshop but I took the piece into Painter occasionally to use that program's blenders and add bits of texture.