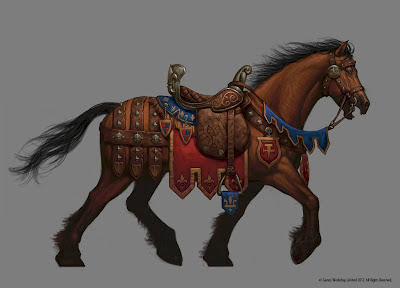 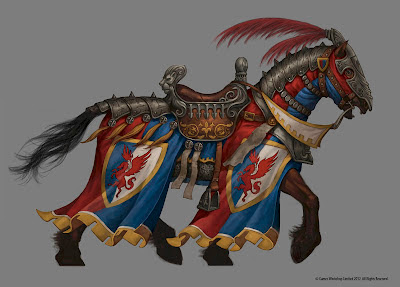 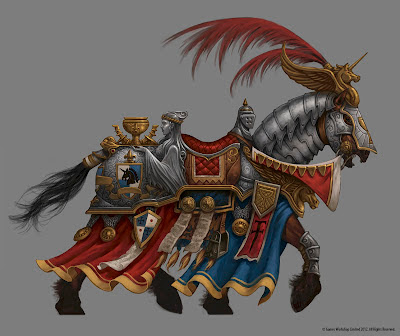 I've been waiting to post these pieces for a long time! I created the barding concept art above for the Warhammer Online game. For those who don't know, Warhammer is a long-running tabletop miniatures game produced by UK-based publisher Games Workshop. The game's popularity has resultd in novels, comics and inevitably, a computer game. Warhammer has a rich, detailed universe and since I used to play the miniatures game, I've always thought it would be fun to work on the game. Consequently, when I had a chance to do some concept art for it, I jumped right in.

Barding is a term used to describe armor for horses. I was provided with a painting of a horse and asked to apply the armor to that particular horse so while I designed the armor in these pieces, the horse was created by another artist.

These barding designs are for a human faction in Warhammer called Bretonnia, which was modeled to some degree after medieval France, England and Arthurian legends. The idea was to create 3 tiers of barding, each more complex and detailed than the last.

I'd love to do more of this kind of concept work. It's really fun to just dig in and explore the possibilities in different armor designs, patterns, etc. If you like these images, you'll be pleased to know I have more. I did a second set of (much darker) barding designs for a faction named Vampire Counts. They will be included in my next post so please come back for more!