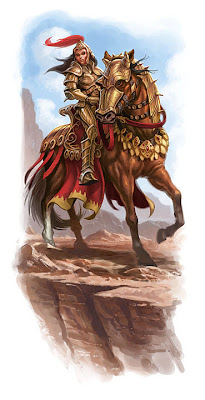 Here's another illustration for a recent issue of Dragon magazine. Chevalier is another word for knight.
Posted by Jim Nelson at 8:42 AM No comments: 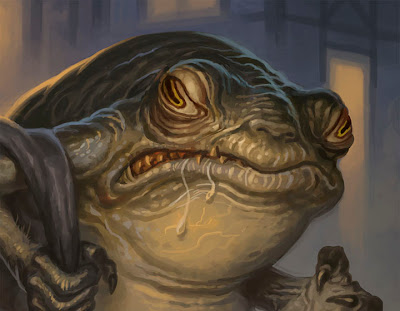 This illustration was done for the recently released Dungeon #191. It depicts a frog-like creature called a Banderhobb stealing through a village at night with a small body in a sack (it's up to the viewer to decide just what kind of body). There's nothing I like better than painting the grotesque so illustrating this creature was fun. There's a special joy for an artist in adding expression to a type of face (in this case, a frog's) that is usually rather expressionless.
I've included a detail shot to provide a better idea of what a digital painting like this looks like "up close".
Posted by Jim Nelson at 2:59 PM 2 comments: 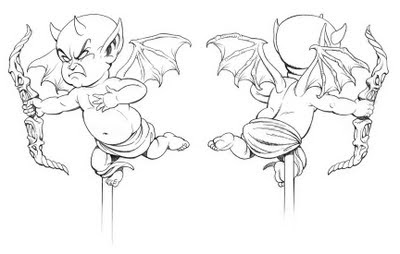 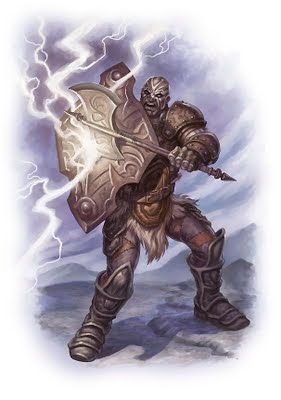 This D&D character is a Storm Warden. The illustration was painted a few years ago and appeared in a book called Primal Power. If you're a D&D fan, you can read more about Storm Wardens in this article: http://www.wizards.com/DnD/Article.aspx?x=dnd/4ex/20091012
I was particularly pleased with this painting, in part because the striking lightning breaks up the shape of the vignette nicely. I also thought the muted (for my palette anyway) colors worked well and I was able to capture the differences in texture between metal, cloth, fur and flesh. That can be a difficult challenge!
Posted by Jim Nelson at 11:19 AM 2 comments: 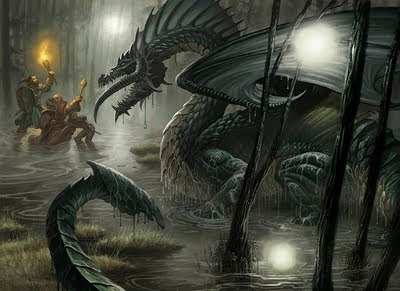 This is another illustration from the recently released D&D supplement: Monster Vault: Threats to the Nentir Vale. It depicts a few adventurers encountering a black dragon (Shadowmire) ina swamp. Glowing "swamp lights" illuminate the scene.
Posted by Jim Nelson at 9:17 AM 3 comments: