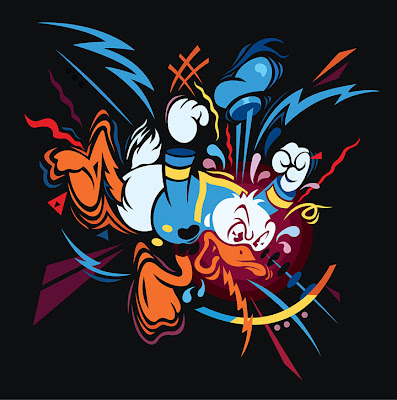 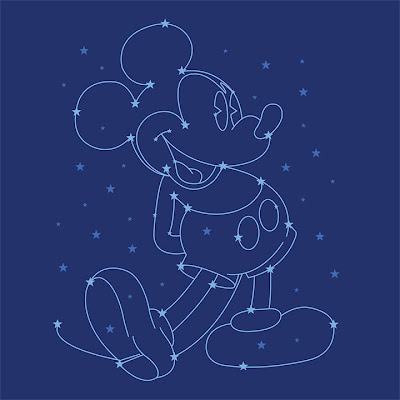 As an artist, I sometimes wander pretty far afield from the fantasy subject matter I'm most know for drawing and painting. Here's an example: two designs I created for a Disney-themed t-shirt competition at Threadless.com. The designs are up for voting through March 25th and I've provided links below so if you like them, please take a moment to vote for them. I'd sincerely appreciate it.

Regarding the designs: I've always liked the early, B&W Mickey Mouse design best so I re-created an iconic Mickey pose in Adobe illustrator and since he's Disney's star character, I placed him among the stars as a constellation. It's a subtle image in terms of color scheme but I think it would make an attractive shirt.

The other image is bold and that's because it's Donald Duck and he's angry. Most of my favorite Donald moments have come when he loses his temper in cartoons and comics so when I chose to create a painting of him for a friend years ago, I made him angry. This design is based on that painting, although it's been re-worked and placed on a black background to give it added "pop" (the original painting was on a deep red background).

I hope you like these departures from the usual creatures and characters that populate this blog.

http://www.threadless.com/mickey/mickey-constellation/
Posted by Jim Nelson at 8:17 AM