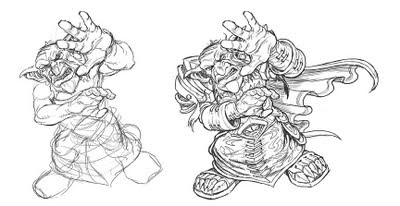 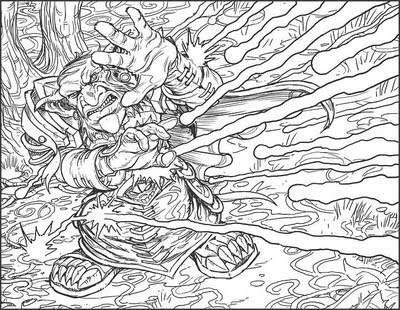 One of the things I want to do with this blog is provide some insight into my working process. I don't create every picture the same way but over the last few years, as I've done more and more digital painting, I've developed a slightly different approach to work. I used to do all of my sketching with pencil and paper and although I still do some of that, I often find myself working with screen-res reference and I've found it's easier to use that reference if I just draw on the computer.

Step 1: As always, I begin every piece by sketching. In this case, the subject was a goblin being bombarded with magical energy. Initially, I pictured that energy as a rain of magical "meteors" so I roughed out poses that involved the goblin shielding his head with his hands. You can see a few of these roughs above. At this stage, I just work with a "hard" brush in Photoshop so I can get the equivalent of an ink line.

Step 2: I changed my mind after the initial roughs and decided to show more of the goblin's face. I worked out a pose where the character is looking up and raising his hands to shield himself rather than covering his head. Once I was happy with the pose, I did a "clean" drawing of the goblin wearing his robes and armor.

These drawings were executed in Photoshop channels. The channel containing the rough was set at a low opacity (25-30%) while the channel in which I was drawing the clean version was set at 65-70% opacity. This method is the digital equivalent of working on tracing paper and I use it all the time.

Step 3: I added a background and some bolts of energy to create the final drawing. This drawing was sent to the art director for approval and, once approved, served as the basis for the painting.

In my next post, I'll describe the painting process!

Email ThisBlogThis!Share to TwitterShare to FacebookShare to Pinterest
Labels: process, world of warcraft